The following individuals were nominated by the ASB Nominations Committee and have agreed to serve in the indicated capacities if elected. Elections will take place online only. ASB Members will receive an electronic invitation to vote via SurveyMonkey on Wednesday, 26 February. Each member is limited to a single vote through this e-invitation, and all voting will be anonymous. There are opportunities to indicate write-in candidates on the ballot. Voting for these elections will close at midnight one week prior to the ASB 2020 annual meeting in Jacksonville. Results of the election will be announced at the Friday Night Awards Banquet at the conclusion of the annual meeting. 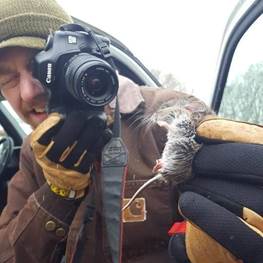 Dr. Brown is an Associate Professor of Biology at Georgia Gwinnett College in Lawrenceville, GA. He has been teaching full time since 2009 and has taught introductory biology for majors and nonmajors, and classes in zoology, evolution, ecology, entomology, parasitology, and animal behavior. He loves teaching students how science works and bringing them into nature. Dr. Brown holds an A.S. in biology from South Georgia College (2001), a B.S. in biology from Shorter College (2003) and a Ph.D. in Biology with a focus on ecology and evolution from Vanderbilt University (2009). His dissertation centers on the behavioral ecology of Neochlamisus leaf beetles with special attention to the creation, maintenance and function of their remarkable animal architectures. He is interested in organisms of all kinds and has researched insects, rodents, and box turtles in the Arizona desert; Anolis lizards in the Puerto Rican rainforest; insects in temperate forests of eastern North America, and trematode-snail interactions in the foothills of the Appalachians. His research on small mammal and insect diversity now serves as a conduit to expose undergraduate students to the scientific process. He greatly appreciates ASB for providing so many students opportunities to share their research and introducing them to professional biologists. He has been a member of ASB since around 2002 and won the society’s Student Research Award in 2009.  He formally served on ASB’s book review committee and since 2013 has served on the program committee for ASB which is responsible for abstract submission and program creation. He is currently serving as Vice President. 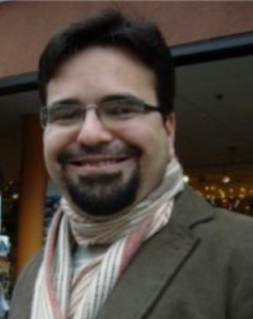 Dr. Alfredo León received a B.S. in General Science (2003) and an M.S. in Biology (2007), from the University of Puerto Rico. During his undergraduate and graduate work, Dr. León focused his studies on regulation of gene expression. He moved to Florida in 2007 and taught as a middle and high school teacher for 4 years, while also working as an adjunct professor at Miami Dade College. During his time as a middle school teacher, he was awarded the institution’s Rookie Teacher of the Year award. Dr. León’s interest in higher education lead him to a position as a full-time faculty member at MDC in 2013. He has taught Biotechnology and various Biology courses at the lower and upper division levels. He has been actively involved in the use of project-based learning and authentic research experiences for introductory Biology laboratory courses. In 2017 Dr. León completed an Ed.D. from the University of Florida with a focus on educational technology. His graduate work explored the use of technology to facilitate active learning strategies use in STEM courses at a community college. Likewise, he has studied the impact of adaptive learning platforms on student’s achievement in non-major Biology courses. He has been an active member of regional science and education organizations since 2015 and has presented educational and curricular research, and mentored students that presented work in the annual conference. In 2019, Dr. León began his role as a department chairperson in the Math & Natural Science department. During this time, he has worked with faculty transforming courses in mathematics using flipped classroom strategies and implementing open educational resources (OERs), in addition to scaling student engagement practices at the department level. Moreover, he has promoted the development of blended education and the increase of bootcamps for student in both math and science. 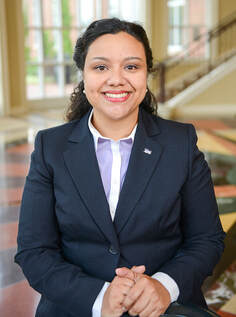 Veronica A. Segarra, Ph.D. is an Assistant Professor in the Department of Biology at High Point University in High Point, North Carolina. She completed her PhD in Biophysics and Biochemistry at Yale and her BS in Biochemistry at the University of Miami. Her contributions to science have come in the form of research breakthroughs in the study of several yeast proteins that coordinate vesicular trafficking pathways, including clathrin, auxilin, and Atg27. Her lab is particularly interested in the identification and trafficking of cargo molecules and adaptors involved in the cellular process known as autophagy, a cellular self-eating process that helps cells cope with starvation and cellular damage. Her laboratory is located at High Point University (HPU) a primarily undergraduate institution in High Point, NC. Her lab is not only the home base for her research program, but a place where undergraduate students receive one-on-one mentoring as they strive to develop their identity in science and research. At HPU she primarily teaches general education courses and upper-level Cell and Cancer Biology courses with laboratory components. Her research interests also include science pedagogy and outreach innovation and best practices. From 2017 to 2019, she served as co-chair of the Minorities Affairs Committee (MAC) of the American Society for Cell Biology (ASCB). As part of her contributions to the ASCB MAC, she led the publication of peer-reviewed manuscripts that highlighted the committee's evidence-based contributions to STEM diversification. In 2018, she was awarded the Inaugural Innovation and Creativity in Teaching Award at High Point University. She is currently the co-director of the Alliance to Catalyze Change for Equity in STEM Success (ACCESS), a meta-organization composed of the diversity-focused committees of the American Society for Biochemistry and Molecular Biology (ASBMB), the American Society for Cell Biology (ASCB), the American Society for Pharmacology and Experimental Therapeutics (ASPET), the Biophysical Society (BPS), The Endocrine Society (TES), and the Scientific Careers Research and Development Group (SCRDG) at Northwestern University. Veronica is also chair (2019-2020) of the ASB Human Diversity Committee. As a Member-at-Large, Veronica hopes to find opportunities to use innovation and evidence-based methods to deepen the ways in which our ASB society connects with its members and facilitates their professional development. 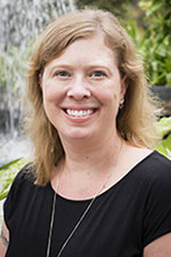 Dr. Heather Joesting received a B.S. in Environmental Science from the University of North Carolina – Wilmington (2001), a M.S. in Environmental and Plant Biology from Ohio University (2005), and a Ph.D. in Biology from Wake Forest University (2011). Currently, Dr. Joesting is an Associate Professor of Biology at the Savannah campus of Georgia Southern University, where she teaches introductory-level course for majors and non-majors and upper-level courses and mentors undergraduate students in two research programs: Coastal Plant Ecology and Aquaponics.  Dr. Joesting loves working with students, and she believes it is her responsibility to train future scientists. To this end, she involves her students in all aspects of their research project, from experimental design to data collection and analysis to dissemination of results, usually as a presentation at the annual ASB Meetings. Her Coastal Plant Ecology research program continues to examine adaptations in coastal plant species, and she recently began a project related to salt marsh restoration and conservation. As the Senior Scientist for the Sustainable Aquaponics Research Center at Georgia Southern University, Dr. Joesting works with undergraduate research students on projects designed to increase plant production and decrease maintenance costs of aquaponics systems, and she has a particular interest in community outreach on using aquaponics in the classroom and as a local source of fresh food in food-insecure areas. Dr. Joesting has been a member of ASB since 2013 and she currently serves as co-chair on the ASB Poster and Presentation Awards Committee. 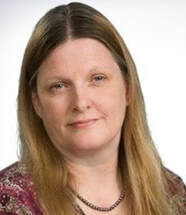 Dr. Valarie Burnett is an Associate Professor of Biology in the Science and Mathematics Department at Newberry College in Newberry, SC.  She received an A.A. (1996) and an A.S. (1997) from Midlands Technical College.  In 1998, she received a B.S. in Biology from the University of South Carolina.  Her undergraduate studies were focused in areas that would prepare her for work in the biomedical field.  In 2004, Dr. Burnett received a Ph.D. in Biomedical Science with a specialty in Neuroscience from the University of South Carolina School of Medicine.  She began teaching Human Anatomy and Physiology as an Adjunct Professor at Midlands Technical College in May 2004.  The following year, she was offered a full-time, tenure-track position in Biology and Chemistry at USC, which she began in Jan 2006 but also continued to teach as an adjunct at MTC until the end of the year.  In 2011, Dr. Burnett accepted a full-time, tenure-track position at Newberry College, which enabled her to concentrate her teaching on human and animal biology.  She was awarded tenure and promotion to Associate Professor in 2016.  In addition to a variety of lower division Chemistry courses, Dr. Burnett has taught both lower and upper division courses in Biology.  Her courses include various levels of anatomy and physiology, histology, comparative vertebrate anatomy, general biology, human biology, investigative biology, Latin and Greek bioscientific terminology, and seminars in biology.  Dr. Burnett’s research at USC and early years at Newberry College was focused on identifying the characteristics and distribution of GAGAergic interneuronal subpopulations in perirhinal cortex and examining their differential loss in a model of temporal lobe epilepsy.  More recently, Dr. Burnett has shifted her scholarly research to student-centered pedagogies.  Dr. Burnett has been developing and implementing student-engaging, active-learning strategies in her courses since the onset of her teaching career.  She and her faculty colleagues in the Biology Program at Newberry College were excited by the student-centered teaching methods called for in the American Association for the Advancement of Science’s 2011 document Vision and Change in Undergraduate Biology Education: A Call to Action.  The faculty adopted this document as their guide to best practices in teaching undergraduate biology.  In 2014 and 2016, Newberry College was among a select group of schools invited to participate in the Partners for Undergraduate Life Science Education (P.U.L.S.E.) Institutes, which involved intensive workshops in the strategies outlined in Vision and Change and development of an action plan for transforming the Biology Department.  Dr. Burnett led the Newberry College PULSE team during 2014-2017 and presented data on these efforts at PULSE and ASB conferences during these years.  Dr. Burnett has continued to develop and implement a variety of student-centered learning strategies into her courses and present data on these methods at ASB over the past several years.  Some of her strategies to promote active-learning and enhanced student-engagement include flipped-classroom assignments, student-led original research projects, quiz games, card games, and development and evaluation of disease case studies.  Dr. Burnett has served on ASB’s Committee on Human Diversity for several years and has Chaired this committee multiple times.  She is currently Co-Chair for the Human Diversity Committee as well as Vice-Chair for the Education Committee.